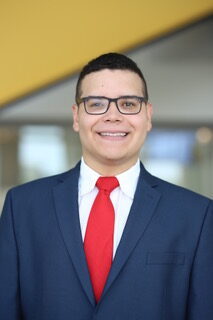 Discover how one Scrivas medical scribe regained his sense of purpose in the midst of the COVID-19 pandemic.

The past two years have been a whirlwind to the world, including Diego Murillo, due to the unprecedented pandemic and what came with it—“COVID burnout.”

“In these past 2 years, life has gone so out of whack I personally felt like I lost all sense of direction and I’ve only recently begun to gain the reins on my life again bit by bit,” noted Diego.

There were two components Diego attributes to being able to find a sense of direction and being able to “get himself out there” again, which was being vaccinated and by becoming a Scrivas medical scribe.

Diego received the COVID vaccine in early March, which helped to give him the confidence and a layer of protection and security he needed. Once he felt more comfortable during these unsure times, he began to refocus on working towards his career goals of becoming a physician assistant (PA). Diego heard of medical scribes from his fellow classmates throughout his college years. He felt that building up certain connections and first-hand experiences was vital to him.

“I recently graduated from Florida International University (FIU) with a bachelor’s in Biological Sciences and a minor in Psychology. Right now, I’m studying for the GRE and hoping to get into PA school in the next application cycle next year and from there, I will figure out what sort of specialty I would like to be in. There are so many fields out there, many of which I’ve never even batted an eye at and working at some of these specialties in my short time here at Scrivas has really made me ponder what I would like to go into.” Diego has begun to scribe for the physiatry and urology specialties.

When asked why he chose Scrivas as his scribe employer, he replied, “A lot of scribe listings that I saw were remote positions but since I really wanted to put myself out there after dealing with the hurdles of remote learning in my last year and a half of college, I just didn’t want to do with any of that.”

Scrivas was able to offer him in-person scribing opportunities and the culture he was craving. “The Scrivas culture is pleasant to say the least. I’ve been so disconnected from things mentally, for so long. When I started working here (Scrivas), everyone I worked with just felt so warm and welcoming. I’m not sure how else to describe it but it felt like there was a small little bubble of normalcy in this crazy world in my eyes.”

Diego noted that the most exciting aspect of working as a Scrivas medical scribe has been the enjoyment of working with his assigned physician, Dr. Ronald Tolchin.

“I really like working with Dr. Tolchin a lot. He is really amazing and he has such amazing energy that he radiates to the workplace and to his patients, which makes all of them gravitate to him and adore him. The entire energy he radiates feels so personalized and caring it makes me want to aspire to be in the same echelon of healthcare providers in the future. Not to mention, he makes the specialty interesting because when I was assigned to the (local) spine center, I didn’t necessarily have a negative opinion on it. Rather, I had no prior opinion on the specialty (physiatry) and thought it would be more of a boring field. He put it on my radar as a possible field I could work in the future, but who can say for certain with all the different specialties I’ve truly yet to see firsthand?”

Diego has not only been inspired by Dr. Tolchin’s charisma for his work but also for his joy of exercise. “I deeply respect him for that (exercising every day) so I have been trying to integrate similar lifestyle changes, by going to the gym every day.” While not scribing or exercising, Diego noted his other passions are to listen to music and tend to his plants on his balcony. He bought his favorite plant, a succulent he named Charlie, when he moved down from West Palm to begin freshman year of college. “I love to see the process of watching them all grow and progress along.” 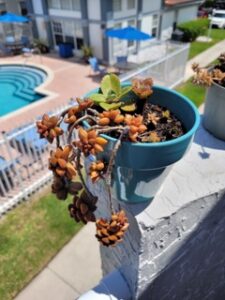 For Diego, finding the way back to his dream of becoming a physician assistant has meant the world to him. When asked what his advice would be for someone interested in becoming a Scrivas medical scribe, Diego declared: “I feel like if you have the heart and energy to help people both in the long term and even in the short term, this particular field can be incredibly rewarding. Meeting and seeing all the people who are so grateful for the work that many of these health providers have done for them—it just warms my heart and fills it with faith. For people interested in scribing it’s relatively accessible. There’s no immediate set of major hurdles or certifications that you would need to apply to other sorts of medical field related positions and it’s a good starting point for anyone that wants to try to get their foot in the door figuratively. Also, I’m pretty sure my average WPM (words per minute) count has increased a decent amount since I started working as a scribe!”

Our physician-designed training program will teach you everything you need to know! You’ll receive hands-on training and extensive on-site experience. Our training programs are the best in the business!

Becoming a healthcare screener is a great way to start your career. If you are dedicated and willing to learn, you’ll be working in a hospital or healthcare environment in no time.

Screeners will utilize a series of questions provided to them to identify if an individual is cleared to enter the building for either a physician appointment or to attend work.

A medical scribe’s primary duties are to follow physicians through his or her workday and chart patient encounters in real-time using a medical practice’s electronic health record system. They can work in an emergency department, urgent care, hospital, or medical office setting. Medical scribes can be thought of as data care managers, enabling physicians to focus on patient care. Medical scribes free up the physician to increase patient contact time, give more thought to complex cases, better manage patient flow through the department, and increase productivity to see more patients. Basically, scribes help doctors be better doctors…. pretty cool, huh?

We have the most comprehensive didactic and hands-on training in the industry. We don’t rely on remote or online modules for our training. We ensure you are the most highly trained and capable medical scribe in the industry by providing in-person didactic training and extensive on-site experience. Our at-your-side on the job training prepares you to meet all the demands of being a scribe.

Don’t have any experience? Don’t worry! You just need a willingness to learn and advance in the medical field. Even if you’re not sure about whether you want to pursue a healthcare degree, our leadership and training track gives you the opportunity to grow without limits.